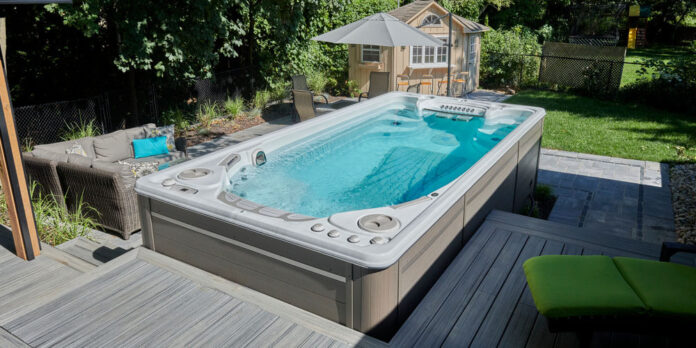 A swim spa is a tub that creates a continuous current that bathers use to swim or walk against. Swim spas are often mistaken for swimming pools. However, unlike swimming pools, swim spas are pretty small. Additionally, you can swim inside a swim spa without ever reaching the wall or turning when you reach the ends. Some people also confuse swim spas with hot tubs. However, unlike hot tubs, swim spas are big enough to allow for swimming. They also maintain cooler temperatures compared to hot tubs. In this write-up, we discuss how a swim spas operate.

How do swim spas work?

As explained briefly earlier, swim spas are a combination of pools and hot tubs. They are usually shaped like tubs but larger. They generate currents against which you swim. The method through which the currents are generated depends on the type of swim spa you are working with. For instance, jetted swim spas use a pump and motor to push water through the jets, creating the current. These swim spas usually have between two to eight jets depending on the size and brand. The number of jets affects the current level.

On the other hand, there are propulsion swim spas. These swim spas generate a current of up to 5000 gallons per minute. They do this using a propeller whose size and spinning speed affects the current level. The size and material of the propeller affect the strength of the current. These two components differ between different brands of swim spas. The current can be controlled from the top side to help you achieve the perfect current.

The current created by these devices are used to guide you when you are swimming or exercising inside the spa. This is why when you are in a swim spa, you cannot reach the end, and you do not have to turn. The current usually guides your movement. Note that the two types of swim jets are not the only type of swim spas in the market. The different types of swim spas are usually determined by their design and performance. However, they primarily only influence how the current is generated since all swim spas operate in the same way.

What materials are swim spas made of?

Most types and brands of swim spas are usually made from varying materials. A single swim spa can also be manufactured from more than one type of material. For instance, most of these devices’ surfaces are made from acrylic and their backings from fiberglass. The framing is usually made from either wood or steel, depending on the type and brand. The materials used to make these products usually affect their qualities, like their durability and performance. They also affect the price of the swim spas.

Swim spas can be used for leisurely swimming, therapy, exercise, and recreation. There is no limit to the people who can use these devices. It is worth noting that swim spas are portable, self-contained, and most of the time, they sit above the ground.

Impress Your Friends with Delicious Chicken Breasts on the Dining Table